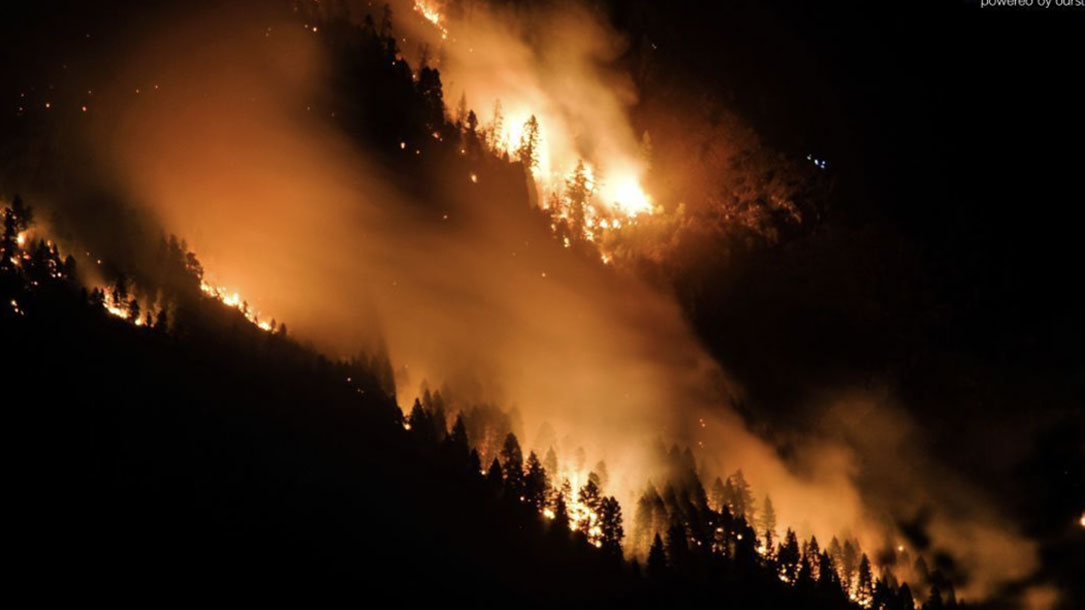 On Monday, the Department of Energy released this groundbreaking research that found Western blazes are increasing the intensity of extreme weather in states as far east as Nebraska...

Wildfires have intensified in both frequency and burned areas in recent decades in the United States and constitute a significant threat to life and property. Sensible heat and aerosols produced by wildfires may affect severe storms and weather hazards downstream. Here, we show that wildfires in the western United States can lead to more severe hazardous weather in the central United States, notably increasing occurrences of heavy precipitation rates and large hail. Both heat and aerosols from wildfires play an important role. As wildfires are projected to be more severe in a warmer climate, the influence of wildfires on severe weather in downstream regions may become increasingly important. 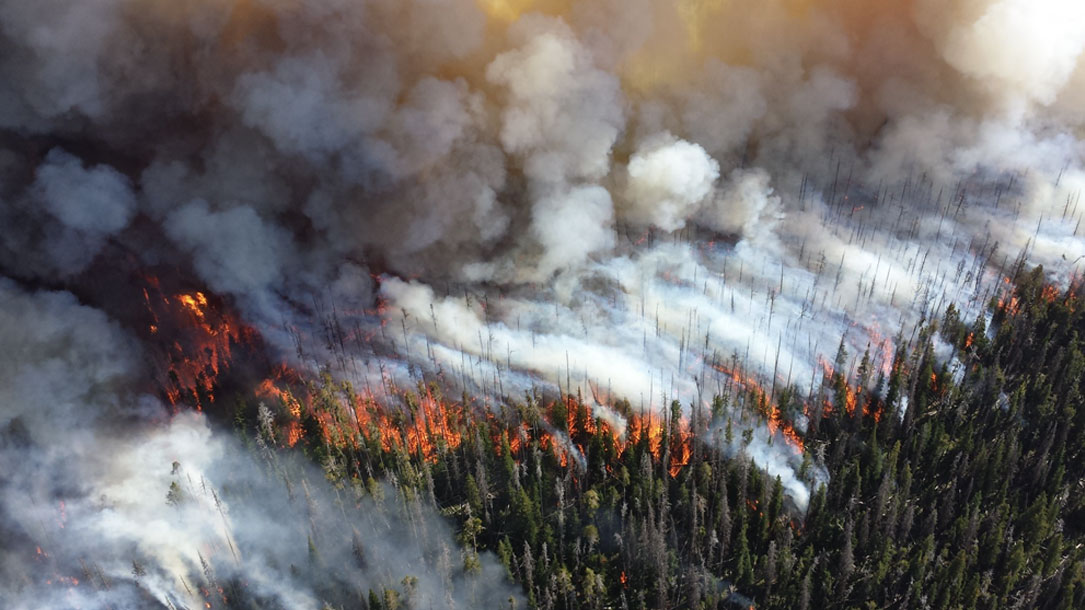 Up in smoke: California’s greenhouse gas reductions could be wiped out by 2020 wildfires

In this short communication, we estimate that California’s wildfire carbon dioxide equivalent (CO2e) emissions from 2020 are approximately two times higher than California’s total greenhouse gas (GHG) emission reductions since 2003. Without considering future vegetation regrowth, CO2e emissions from the 2020 wildfires could be the second most important source in the state above either industry or electrical power generation. Regrowth may partly of fully occur over a long period, but due to exigencies of the climate crisis most of the regrowth will not occur quickly enough to avert greater than 1.5 degrees of warming… 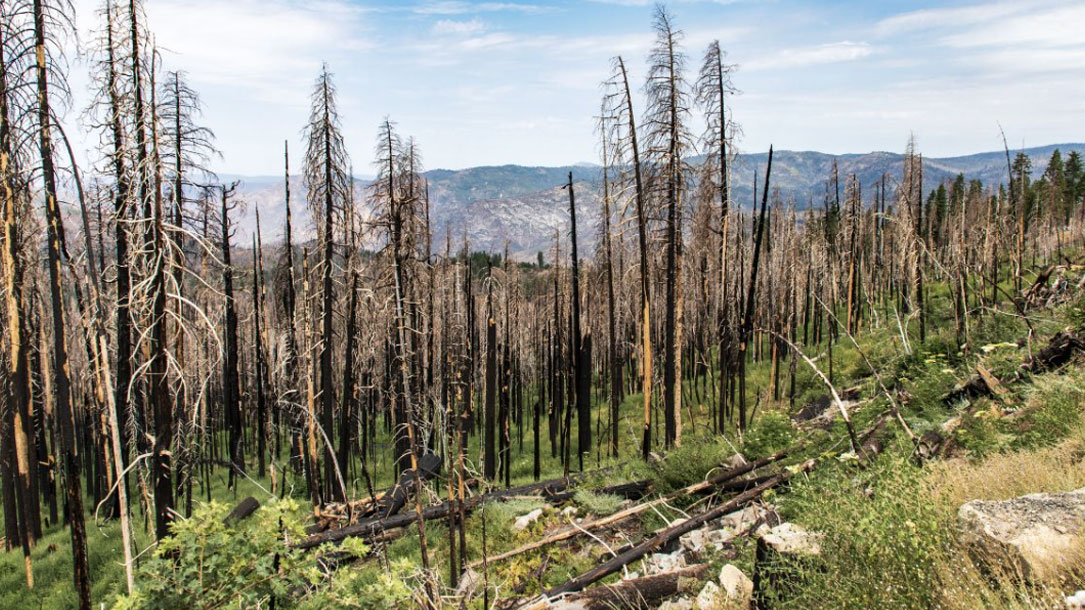 Research is clarifying what we already know: our collective efforts to slow down climate change with natural climate solutions need to be supported by transitioning to renewables as soon as possible.

Wildfire smoke now exposes millions of Americans each year to dangerous levels of fine particulate matter, lofting enough soot across parts of the West in recent years to erase much of the air quality gains made over the last two decades.

In late September, Stanford University researchers published this study that found residents of Western states were exposed to a 27-fold increase of harmful particulate matter pollution, known as PM2.5, between 2006 and 2020 as wildfires intensified. 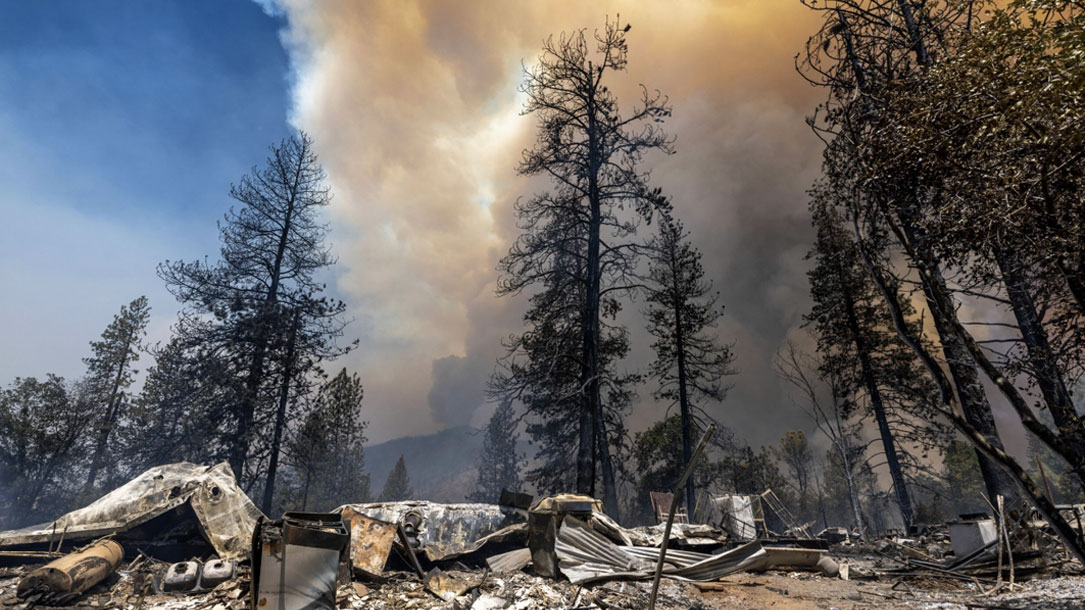 Western wildfires are fueling extreme weather in other states

Helping the people around you understand that taking climate action will have far-reaching effects can be difficult. Yet research is clarifying what we already know: our collective efforts to slow down climate change with natural climate solutions need to be supported by transitioning to renewables as soon as possible.

In late September, Stanford University researchers published a study that found residents of Western states were exposed to a 27-fold increase of harmful particulate matter pollution, known as PM2.5, between 2006 and 2020 as wildfires intensified.

And on Monday, the Department of Energy released groundbreaking research that found Western blazes are increasing the intensity of extreme weather in states as far east as Nebraska… 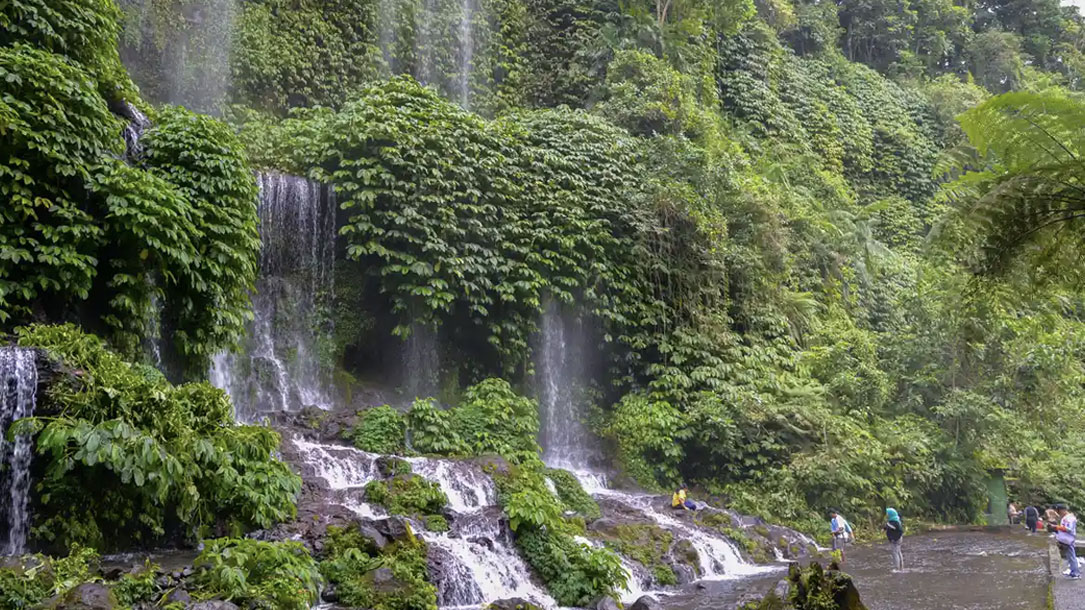 New data suggests that forests help keep the earth at least half of a degree cooler, protecting us from the effects of the climate crisis.

Researchers from the U.S. and Colombia found that, overall, forests keep the planet at least half of a degree Celsius cooler when biophysical effects — from chemical compounds to turbulence and the reflection of light — are combined with carbon dioxide… 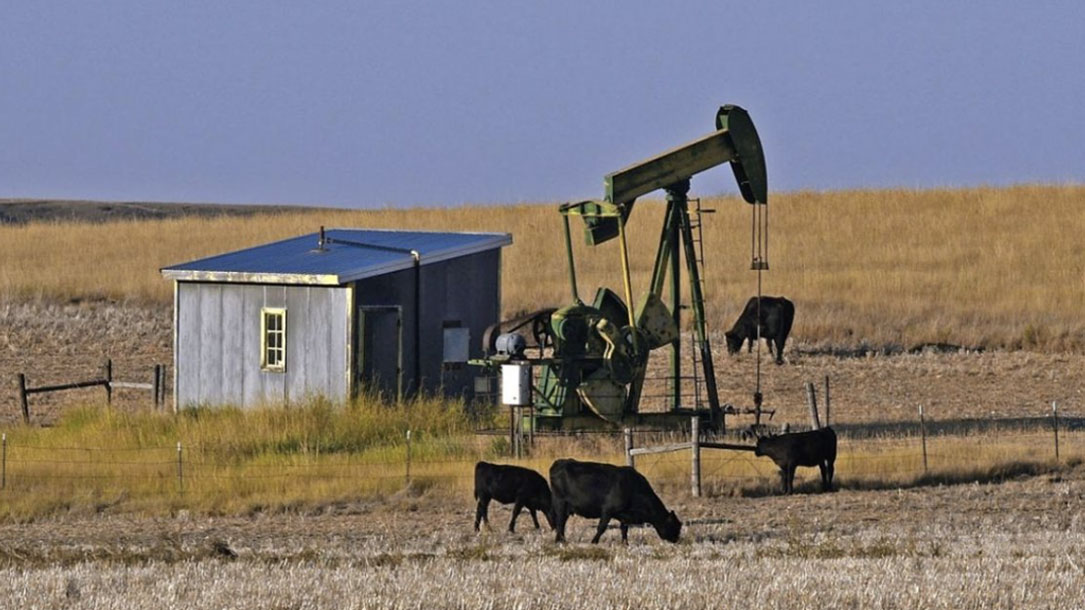 Keeping cattle on the move and carbon in the soil

Farmers and ranchers have depended on a relatively stable climate for generations. That's no longer possible. Conserving the land won't ensure that agriculture survives, and farmers know it. We can help.

The Obrechts stand at the forefront of an emerging collaboration between ranchers, conservation groups, and governmental agencies that aims to protect, restore, and revitalize the United States and Canada’s prairies — or what’s left of them…

Researchers estimate that grasslands could contain as much as 30 percent of the carbon stored in the Earth’s soil. Plowing them in order to plant crops releases large amounts of that carbon into the atmosphere… 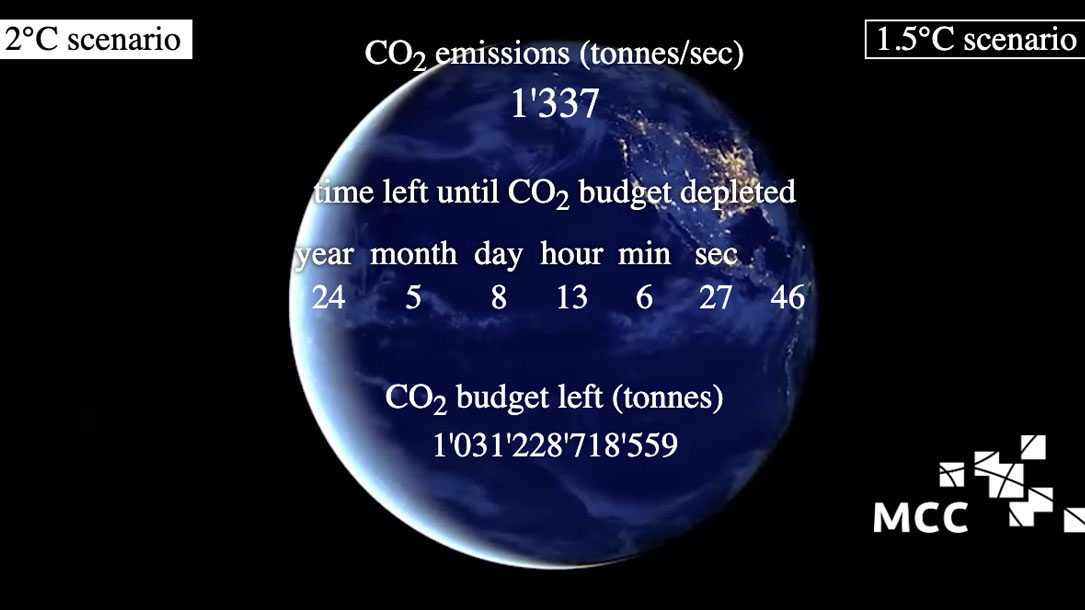 How fast the Carbon Clock is ticking

Check out this interactive website. With just one click, you can compare the estimates for both temperature targets and see how much time is left in each scenario.

We know we will need nature-based solutions and renewables to slow down climate change in a timely manner. We also know that ground-mounted renewables can work as partners with farmers if designed appropriately.

So, what’s a climate budget?

It’s related to how fast the Carbon Clock is ticking: how much CO2 can be released into the atmosphere to limit global warming to a maximum of 1.5°C and 2°C, respectively… 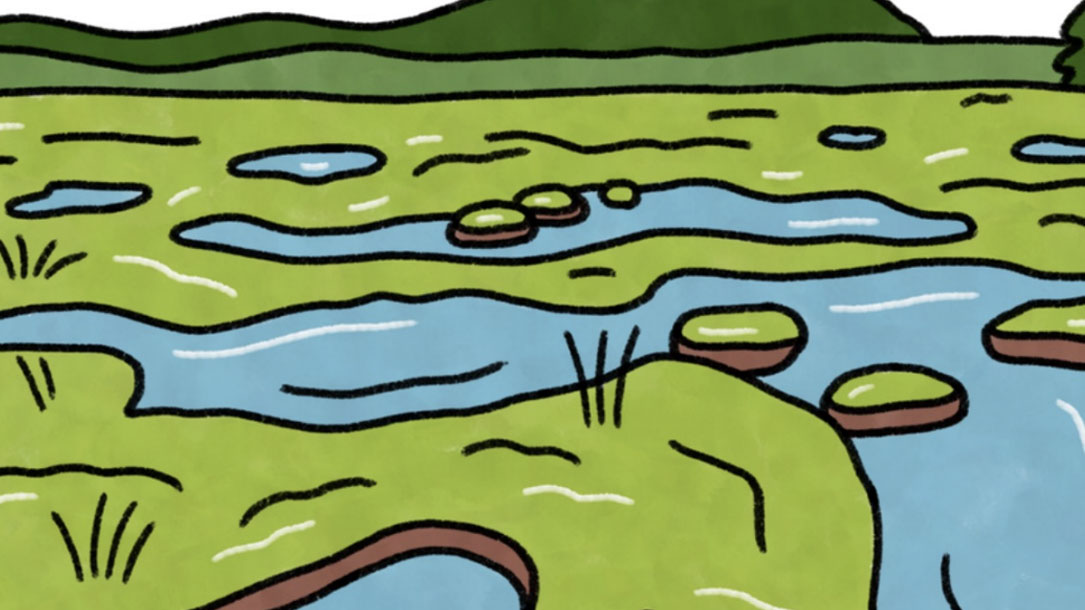 Check out this slide show Georges River Land Trust used to communicate about the importance of peat bogs. It's very effective as a communication tool; you learn a lot even just by skimming. Perhaps you can use something like this to communicate about an important natural resource in your area...

What’s a peat bog? Where’s the Rockland Bog? What’s special about it? Why conserve it? How can you make a difference? 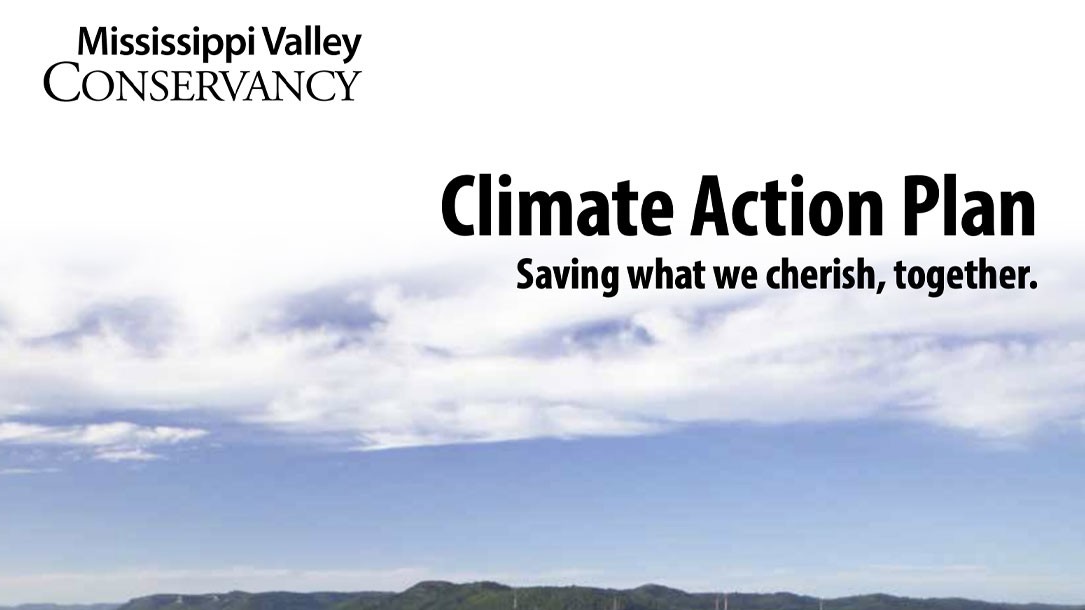 "Together, we can address one of the greatest challenges our region has ever faced..."

What is it about the Driftless area you love? Is it the foggy mornings overlooking the valley? Or going fishing with your family in the spring? Perhaps it’s the sounds of migrating sandhill cranes and the call of the spring peepers.

Too often we think of climate change as occurring on a global scale or something that will happen in the future. Yet climate change already is causing profound changes with damaging effects to the land and water you love: wildlife habitat, lakes and streams, and farmland, right here in the Driftless Area, are at risk as never before. 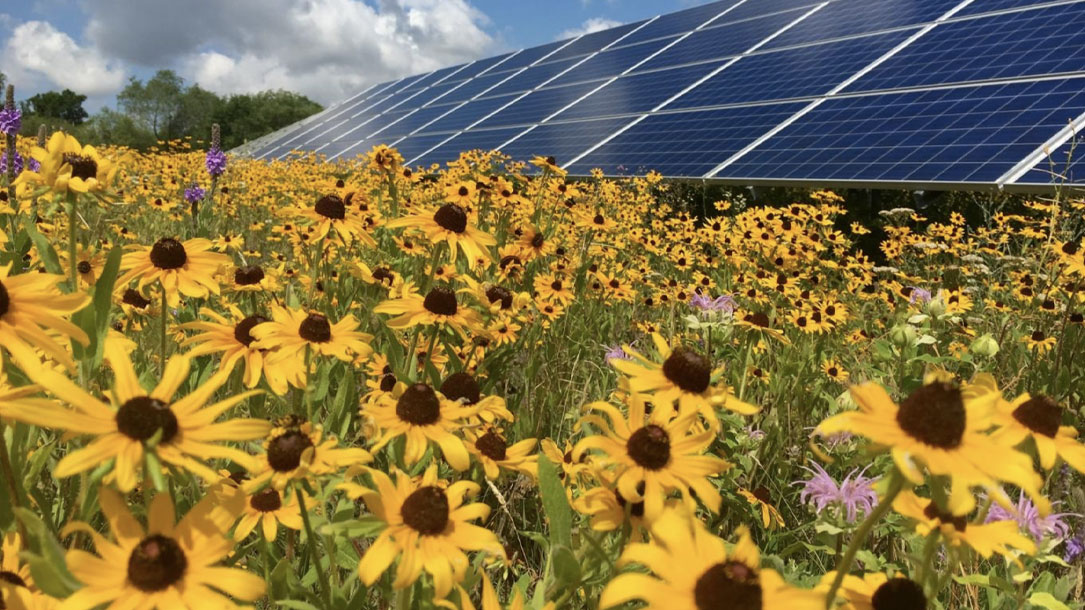 Solar energy and its place on the land

The Mississippi Valley Conservancy works in Wisconsin where they conserve a wide range of landscapes. The organization developed a Climate Action Plan and is working to help the community understand how local action can inspire big impacts.

In a world beset with climate change and its attendant fires and floods, the need for solar energy is immense — vital if the world is to quit burning fossil fuels, the primary cause of the climate crisis…

The trick, for those of us in the business of land conservation, is to make a contribution to that effort without compromising our missions of protecting biodiversity and working lands that produce the food we need. There’s a growing body of research and practical application that offers hope that this can happen using agrivoltaics, the practice of combining agriculture and solar energy collection — a dual use of the land…